These books may be accessed via Overdrive by signing in with your patron number found on the back of your library card at http://nebraska.lib.overdrive.com. They may be downloaded to portable devices and are only available to Alliance Public Library patrons, versus the entire Overdrive consortium, so availability should be good.

The Dilemma of Charlotte Farrow by Susam Martins Miller: During the exciting days of the 1893 Chicago Exposition a young woman’s social position forces her to make difficult choices.

Gathering of Waters by Bernice L. McFadden: A deeply engrossing tale narrated by the town of Money, Mississippi—a site both significant and infamous in our collective story as a nation. Money is personified in this haunting story, which chronicles its troubled history.

Gods Without Men by Hari Kunzru: Jaz and Lisa Matharu are plunged into a surreal public hell after their son, Raj, vanishes during a family vacation in the California desert. However, the Mojave is a place of strange power, and before Raj reappears inexplicably unharmed–but not unchanged–the fate of this young family will intersect with that of many others.

Over and Under the Snow by Kate Messner: Discover the wonder and activity that lies beneath winter s snowy landscape in this magical children’s book.

Prairie Silence by Melanie Hoffert: A rural expatriate’s struggle to reconcile family, home, love, and faith with the silence of the prairie land and its people.

Scones and Scensibility by Lindsay Eland: In a small New Jersey beach town, twelve-year-old Polly Madassa, who speaks like a character in her two favorite novels, “Pride and Prejudice” and “Anne of Green Gables,” spends the summer making deliveries for her parents’ bakery and playing matchmaker, with disastrous results.

Shout Her Lovely Name by Natalie Serber: Mothers and daughters ride the familial tide of joy, regret, loathing, and love in these stories of resilient and flawed women.

Weeknight Dinners by the Gooseberry Patch: Need to change up dinnertime and try something new? Would you rather serve a homecooked meal instead of ordering take-out? Weeknight Dinners is here to help! In addition to over 250 delicious recipes like you expect, each chapter in this cookbooks is devoted to a different theme…you’ll breeze through the week!

What We Saw at Night by Jacquelyn Mitchard: After glimpsing an older man in a room with a dead girl, sixteen-year-old Allie, who has a life-threatening allergy to sunlight, discovers she is the lone key to stopping a serial killer.

Wonders of the Invisible World by Patricia McKillip: A collection of myth and fairy tales that include princesses dancing with dead suitors, a knight in love with an official of exotic lineage, and fortune’s fool stealing into the present instead of the future.

Threat Vector by Tom Clancy: As China plans to invade Taiwan, and launches a cyber attack on the U.S., President Jack Ryan, his son, and the team at the Campus have to act fast if they are going to stop the increasingly rogue nation.

Notorious Nineteen by Janet Evanovich: After a slow summer of chasing low-level skips, Stephanie Plum finally lands an assignment that could put her checkbook back in the black. Geoffrey Cubbin, facing trial for embezzling millions from Trenton’s premier assisted-living facility, has mysteriously vanished from the hospital after an emergency appendectomy.

Hiss and Hers by M.C. Beaton: Agatha Raisin investigates the murder of local gardener George Marston when his dead body is discovered in a compost heap.

Two Graves by Michael Palmer: Agent Pendergast has discovered that his wife is still alive, after twelve years of thinking she was dead. After she is abducted at their reunion, he goes on a cross-country quest to rescue her.

Sweet Tooth by Ian McEwan: Recruited into MI5 against a backdrop of the Cold War in 1972, Cambridge student Serena Frome, a compulsive reader, is assigned to infiltrate the literary circle of a promising young writer whose politics align with those of the government, a situation that is compromised when she falls in love with him.

Back to Blood by Tom Wolfe: A colorful cast of residents and visitors to Miami go about their daily activities, both legal and illegal.

Cross Roads by William Paul Young: Tells a story of the incremental transformation of a man caught in the torments of his own creation, somewhere between Heaven and Earth

The Forgotten by David Baldacci: After he receives a posthumous note from his aunt hinting that things are horribly amiss in her Florida Gulf Coast town, Army Special Agent John Puller uncovers a shocking conspiracy. 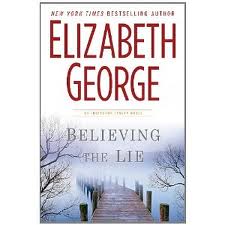 Elizabeth George is one of my Mother-in-law’s favorite authors so I decided to review her latest read, Believing the Lie.

Is it an accident or murder? You may think you have the answer figured out several times over but will not discover the truth until the very end!  Inspector Thomas Linley is sent undercover to investigate a drowning that has been ruled accidental. This subplot produces page-turning curiosity and characters that live in the mind and heart long after the book has been returned to the library. I don’t want to tell you more as the weaving of personalities and plot produce a vibrant tapestry perfect for late night reading. I plan to snag more of George’s books from the library’s treasure shelves!

Book reviews may be shared with our readers by submitting your text via the contact form on this page.

Please join us this Friday, January 4th at noon in the community rooms for our first Brown Bag of 2013.

Celia Parrott reviews two books written by Alexandra Fuller, who was born in England in 1969. In 1972, she moved with her family to a farm in southern Africa. She lived in Africa until her midtwenties. In 1994 she moved to Wyoming, where she now resides.

A story of survival and war, love and madness, loyalty and forgiveness, Cocktail Hour Under the Tree of Forgetfulness is an intimate exploration of Fuller’s parents and of the price of being possessed by Africa’s uncompromising, fertile, death-dealing land.

The Legend of Colton H. Bryant is the unforgettable true story of a soulful boy with a mustang-taming heart who comes of age in the oil fields and open plains of Wyoming.

Light refreshments will be provided courtesy of The Friends of the Library.