Watching the Dark by Peter Robinson is one of those books that would be fun to take on vacation. This first-rate little gem involves a complex case of corruption, a highly decorated cop found dead, and undercover journalist washboard tortured to death, and a missing teenage girl. Banks follows a twisting trail from England to the dark, evil alleys of Tallin’s Old Town. Ad Banks moves ever closer to solving the crimes, the becomes less likely he will be alive to finish the case. Comeone doesn’t want him talking. To enjoy this novel, it is irrelevant of you have read and other Inspector Banks novels. I have read others and they really do hold one’s interest and reward with a conclusion I bet you wouldn’t have guessed! Robinson’s novels take you on a tour through history and current events with well developed characters.

Reviews may be submitted for posting via our Contact form we’d love to hear from you!

Kids can get up close and personal with the City’s big rigs, ride the BNSF train, have a hot dog, and have their faces painted. Hope to see you there!

The Great Deformation by David Alan Stockman: In this revisionist history of the American state, former Reagan budget director and bestselling author David Stockman shows where capitalism went wrong, how it was corrupted, and how it might be restored.

Secrets of Silicon Valley by Deborah Piscione: Offers Silicon Valley as a productive example of entrepreneurship and innovation, noting how the region has demonstrated continued growth and investor interest in spite of economic setbacks elsewhere in the world.

Damn Few: The Making of a Modern SEAL Warrior by Rorke Denver: Explaining the unique psychology behind the SEALs’ legendary training program, a high-level SEAL officer reveals the modern techniques that transform a chosen few into lethal warriors and details how the SEALs’ creative operations became front-and-center in America’s War on Terror.

The Beauty Detox Foods by Kimberly Snyder: Discusses the top 50 foods that are most beneficial for the body.

Amigurumi Toy Box by Ana Paula Rimoli: Sparkling with playful ideas inspired by her children, Rimoli presents a wildly imaginative collection that will tickle kids of all ages.

A Higher Call by Adam Makos: Tells the story of a World War II mission in 1943, just before Christmas, when a German pilot helped lead a wounded United States bomber and its crew to safty.

The Girls of Atomic City by Denise Kiernan: Relates the history of the women who contributed to the war work in World War II at Oak Ridge, Tennessee, and captures the spirit of the secret war work and contributions of those women.

The Duck Commander Family by Willie Robertson: Offers an inside look at the Robertson family, stars of “Duck Dynasty” on A&E.

We look forward to seeing you this week!

Here is what I know:
My Name is Budo.
I have been alive for five years.
Five years is very long for someone like me to be alive.
Max gave me my name.
Max is the only human person who can see me.
Max’s parents call me an imaginary friend.
I love Max’s teacher, Mrs Gosk.
I do not like Max’s other teacher, Mrs Patterson.
I am not imaginary.

So begins Memoirs of an Imaginary Friend by Matthew Dicks. This story is magical, moving, insightful, suspenseful, and all those other wonderful words that describe a good book.

With a compelling narrative voice, Budo, the imaginary friend of eight-year-old Max, recounts the most monumental weeks of his existence. Budo worries both for himself and for Max, who is “on the spectrum” and has problems navigating the world around him. At five years old, Budo has reached an unusually old age for an imaginary friend, and he often contemplates what it will mean to disappear from the world and whether or not there is a way to extend his life. But he soon finds his concern should be for Max, who finds himself in a dire situation at the hands of an overly tenacious teacher.

Mr. Dicks has penned a truly enchanting tale – one that will be hard to put down, even after the last page has been read. This book is available in our collection, so please check it out and let yourself be swept away by the world of Budo.

We only have two weeks until the Fourth of July, which means plans are being made and barbecues are being planned. I’ve collected some links for those who find themselves preparing for a blowout celebration. Simply click on the pictures for more info on each project or recipe. 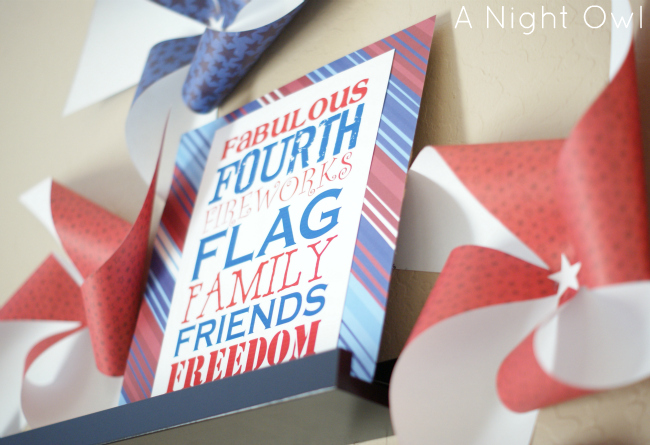 We’re half way through the program – have you been testing?

Robert Ludlam’s the Utopia Experience by Kyle Mills: While assessing the military potential of a new intelligence device, Covert-One’s Colonel Jon Smith realizes the technology must never fall into the hands of America’s enemies.

The Dinner by Herman Koch: Over dinner, two couples move from small talk to the wrenching shared challenge of their teenage sons’ act of violence that has triggered a police investigation and revealed the extent to which each family will go to protect those they love.

The Good House by Ann Leary: Hildy Good, who lives in a small town on Boston’s North Shore. Hildy is a successful real-estate broker, good neighbor, mother, and grandmother. She’s also a raging alcoholic who finds herself embroiled in the underbelly of her New England town.

Slight of Hand by Phillip Margolin: While on the trail of a stolen relic, P.I. Dana Cutler is called back to Virginia where she must stop Charles Benedict, a criminal defense lawyer, amateur illusionist and professional hit man, from framing a millionaire for murder.

Starting Now by Debbie Macomber: After being let go from her high-pressure law firm, Libby Morgan reaches out to old friends and spends time at A Good Yarn. Just as everything is coming together, Libby must make a choice that could forever change the life she holds so dear.

The Guardian by Lewis Beverly: After schoolteacher Jodi Winfield finds a little girl on the side of the road, she delves into the isolated community of the Lancaster Old Order Amish to find answers.

12th of Never by James Patterson: A week after giving birth, Lindsay Boxer is investigating two cases: a grisly murder where the main suspect is an NFL player and an eccentric professor who thinks his dreams of a murder are real.

Me Before You by Jojo Moyes: Louisa Clark is an ordinary girl living an exceedingly ordinary life until, she takes a badly needed job working for ex-Master of the Universe Will Traynor, who is wheelchair bound after a motorcycle accident.

The Secret Keeper by Kate Morton: Fifty years after she witnessed a shocking crime at her family’s farm in the English countryside, Laurel, now a successful London actress, returns to the farm and is overwhelmed by family secrets she has not thought of in decades.

Stop in a check out our Summer Reading dinosaur portraits!

Portraits may be submitted through the end of the Summer Reading program.

The Edge of the Earth by Christina Schwarz is a novel that takes place in 1898. Trudy, a well educated woman raised with the fact that she will marry her childhood friend, falls in love with the brilliant, ambitious Oskar. In Oskar, Trudy believes she has found the teicket to escape her boring Wilwaukee life. Turdy’s restless yearning for adventure takes her to a remote lighthouse in California. There she finds the only inhabitants, a lively family of six and a crazy man. The surprising magical dsicvoery in the rocks takes the story in an unexpected directon which is truly fun. The characters are absolutely unforgettable and the story of secrets and self-transformation spins a tale worthy of reading again. All of my favorite imaginings were in this little book; the ocean, sea trasures, children and surprises. This vivid, haunting tale is a must on your vacation read list.

Reviews may be submitted for posting via our Contact form we’d love to hear from you!