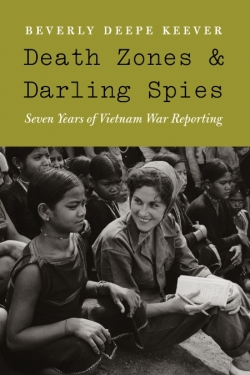 The large panoply of literature on the Vietnam War is wide and varied. Death Zones and Darling Spies by Beverly Deep Keever is definitely a work that will be discussed in historical circles for many years to come. Keever was, for lack of a better term, a journalistic trendsetter.

Fresh out of the renowned Columbia Journalism School in 1961, along with a master’s degree and letters of introduction to A.P. bureau chiefs in Asia, Deepe, then 26, embarked on a trip around the world. She allotted herself two weeks in South Vietnam. Seven years later, she was still there, in addition to having earned the distinction of being the longest serving American correspondent covering the Vietnam War. She also earned a Pulitzer Prize nomination in the process.

In Death Zones and Darling Spies, Beverly Deepe Keever describes what it was like for a Nebraska farm girl with humble beginnings to find herself halfway around the world, while trying to make heads and tales of one of the nation’s longest and bloodiest wars.

In1965 she travelled with American combat units, braving elephant grass and the jungle, while witnessing their unprecedented technology and courageous valor, along with their inability to distinguish peasant farmers from come-and-go guerrillas.

While Lyndon Johnson pondered the beginnings of The Battle of Khe Sanh and declared in his deep Texas drawl that, “I don’t want no damn Dien Bien Phu,” Keever opted to head for the besieged base and covered the vicious fighting that continued for seventy-seven days.

Keever’s large collection of memos to editors, along with published and unpublished dispatches for New York and London newspapers and magazines, supply the reader with time machine descriptions of Buddhist demonstrations and numerous coups, both fake and genuine.

Two Vietnamese interpreters, self-described as “darling spies,” helped her navigate Vietnam’s darkly shadowed world and below-the-surface war. These memoirs, both personal and cycloramic, describe the nightmare visions of war, along with Americas rise and descent of power and status.