Nebraska Author, Mari Beck, will be signing and selling books at the Loup City Public Library on February 23, 2016, 12:00-1:00 PM. We invite you to bring your lunch and share a great time with us!

The Broken Road: During an IED mine-clearing mission on a road outside of Baghdad, acclaimed photojournalist Steve Rappaport captures the haunting image of a soldier carrying an injured child and a wounded comrade away from a massive explosion. When Rappaport is separated from his equipment in the ensuing firefight, the picture touted as “The Rescue” goes viral, forever changing the lives of Army Specialist Riley Favreau and Brenda Jenner, the wife of the soldier whose life he failed to save.

The Date: Nick Simon is a bestselling author who has everything going for him but it’s still not enough. When he finds himself committed to the psychiatric wing of a hospital after a failed suicide attempt, he meets and falls in love with Emily, a terminally ill young woman with a vibrant zest for life and a date circled on her calendar: the date of her own death. Determined to end her life on her own terms via the Death with Dignity Act, Emily challenges the people around her to accept her decision and set her free. Certain that he’ll be able to change her mind before time runs out, Nick undertakes a journey that will change his life forever. 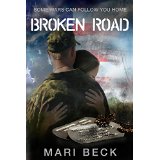 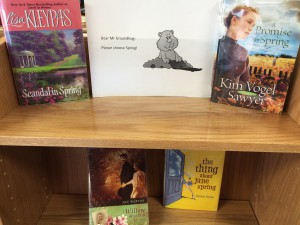 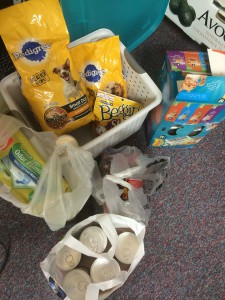 Where There’s A Wolf, There’s a Way by Lisi Harrison

The Ghoul Next Door by Lisi Harrison

The Princess in Black by Shannon Hale

Coming Soon to our DVD section:

In a Dark, Dark Wood by Ruth Ware
Shotgun Moon by K.C. Rae
The Shadow of a Noose by Ralph Compton
The Kraken Project by Douglas Preston
Off the Grid by C.J. Box (mid March release date)
Deceived by Irene Hannon (Private Justice series)
Spycatcher by Matthew Dunn
The Revenant by Michael Punke
Rustler’s Moon by Jodi Thomas
The Prisoner’s Gold by Chris Kuzneski (Hunters series)
Cross Justice by James Patterson
Pretty Dead by Anne Frasier
Rose Under Fire by Elizabeth Wein
Bridge of Spies by Giles Whittell
The Way Home by Cindy Gerard
Where Secrets Sleep by Marta Perry
Woman with a Secret by Sophie Hannah
Dead Eye by Mark Greaney
Corrupted by Lisa Scottoline
Private Down Under by James Patterson
Playing Dead by Julia Heaberlin
Thin Ice by Irene Hannon (Men of Valor Series)
Lie Still by Julia Heaberlin
Blessed are the Dead by Kristi Belcamino (Gabriella Giovanni series)
Blessed are the Meek by Kristi Belcamino (Gabriella Giovanni series)
Into the Fury by Kat Martin (Boss, inc series)
Steadfast Heart (large print) by Tracie Peterson
Stay Dead by Anne Frasier
Killing Time by Cindy Gerard
The Forbidden Tomb by Chris Kuzneski (Hunters series)
The Bone Tree by Greg Iles
This is Where it Ends by Marieke Nijkamp
The Ranger by Ace Atkins
The Lost Ones by Ace Atkins
The Next Thing on My List by Jill Smolinski
The Orchard at the Edge of Town by Shirlee McCoy
The Short Drop by Matthew FitzSimmons
NYPD Red 4 by James Patterson

Dear Valentine:
Be a Gem and come make Valentines for community members on January 30th at 2 pm at the library. Valentines will then be distributed to Westside Park residents. Open to all ages! Craft for your Community! 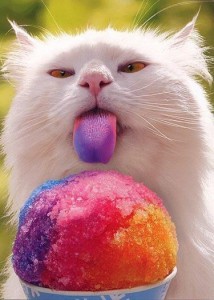 Cats have taken the lead!

Thinking of starting your own small business? We have the opportunity to have a two day beginning entrepreneur class at the end of April. This class would be taught by University of Nebraska extension agents and cover the basics of small business entrepreneurship. The classes would be free; however, we need a minimum of 10 people to put them on. Are you interested in owning a small business or do you know someone who is? Contact us at 308-745-1589.

It is Cats Versus Dogs at the Loup City Public Library! Bring in a can of food to vote for your favorite! All food will be donated to the Humane Society following the program! The Cats won last year…..will they continue to reign this year?