Deanna Raybourn’s Veronica Speedwell historical series is all good fun!  If you are looking for something frothy to read this Summer, look no further. It has mystery, romance, and sparkling wit. This is the fourth book in the series.  It is set on an island where superstitions abound about Mermaids and smugglers.

While Raybourn’s novel winks at the reader as she describes the islanders’ beliefs in Merfolk, this novel by Shea Ernshaw gives the “mermaids” a sinister turn. Many, many years ago, three sisters were hung as witches in this little village by the sea. Each year since that time, the three sisters come back, take over the bodies of three teenage girls, and lure young village boys to their deaths. The writing is good but the story was predictable and suffered a bit at the end.

There were no mermaids in this middle-grade novel. There were escaped prisoners. An imaginative use of letters, texts, and comic strips to illustrate the state of a small town before, during, and after a prison escape helped hold my attention. However, it felt as if the author decided to get a specific message across and built her story around that message instead of vice versa.  In this case, racism is prevalent and bad became a cudgel to drive home the point when it might have been better to “show” instead of “tell” all of the time.

Tara Lazar, Author, and Ross MacDonald, Illustrator, struck comic gold with this little book. What a fun way to present numbers! Private I looks into the disappearance of 9 after rumors abound that 7 ate 9. I will recommend this to several of our teachers.

Ayaz Virji is a young doctor who moved his family to rural Minnesota to provide care to the community. However, after the election of 2016, he felt betrayed and concerned for the safety of his family.  Encouraged by a local Lutheran Minister to speak publically about what it is to be Muslim, Virji made several appearances to talk with concerned citizens; however, this often left him more discouraged. This was an enlightening audiobook. 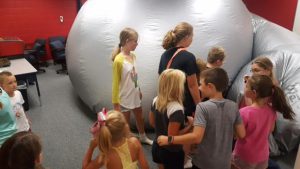 If you enjoyed Enger’s writing in “Peace Like a River”, you will enjoy “Virgil Wander”.  The characters and the writing are the point. The plot is vague and ebbs and flows without a complete resolution. Enger likes to add a touch of magical realism to his almost fairy-tale like stories.

I am always leery of “funny” books because I rarely find them to be as hilarious as everyone else. However, this one lived up to the billing.  When a group of unteachable kids meet up with a burned out, ready for retirement teacher, sparks fly.  Sweet and just wonderful.

The illustrations are charming and the story is just fabulous. Pick it up…no matter your age.