Posted on August 1, 2019 by Elizabeth Hittle

Hey, everybody! Hello, August! Halfway done with the year already and still so much to do! But this summer was a BLAST! I want to give a HUGE thank you to my amazing library board ladies, without whom the Summer Reading Program wouldn’t have run smoothly at all!! They do so much at every single event the library has, and they do not get enough credit or praise for it! Be sure to tell them how much you appreciate them the next time you see them! I know I have 🙂 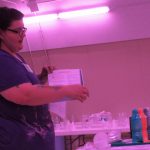 This year’s Summer Reading Program theme was “A Universe of Stories” and all about space and S.T.E.A.M. (Science Technology Engineering Art Math). We learned all about planets, stars, the moon, rockets, and did science experiments! It was a lot of fun and we learned so much! We had NINETEEN participants and they checked out a total of 111 books all together!!!

The first week was about planets. For the science experiment to start off the program, I did what is called ‘Foam Explosion’: I added dry yeast to dish soap, food coloring, and hydrogen

peroxide to get a foamy reaction! For crafts, the kids got to make Galaxy Bottles, drew their own planets, and then got to craft alien houses for their planets. I read ‘There’s No Place Like Space!’ (with the Cat in the Hat) by Tish Rabe, ‘One Day A Dot’ by Ian Lendler, and ‘Space Boy & The Space Pirate’ by Dian Curtis Regan to the kids, which introduced them to our solar system, explained how Earth was made, and how to use your imagination to create your own world to play in. 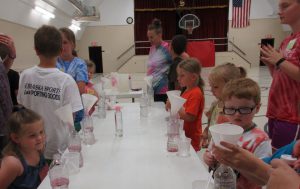 The second week was about stars. For the science experiment, I did something called ‘Lava Lamp’, where you add Alka-Seltzer tablets to food coloring, water, and vegetable oil to make your own little lava lamp to look at! The crafts the kids did were Nebula Jars, 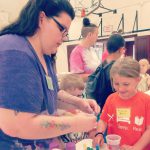 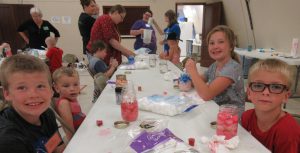 Our third week was about our Moon, since the 50th anniversary of the Moon Landing was July 20th, 2019. For a science experiment, I did the ‘Unleakable Baggie’, where you put water in a Ziploc bag, get rid of the extra air and seal it, and then pierce the bag all the way through with pencils. No leaks! For crafts, the kids got to make Moon Sand, Moon Rocks, do Oreo Moon Phases, and make Moon Rovers for their alien houses they made in week one. I read ‘Papa, Please Get the Moon For Me’ by Eric Carle and ‘Curiosity: The Story of a Mars Rover‘ by Markus Motum, a cute story about a father getting down the moon for his daughter, and a story all about the famous Mars rover up on Mars right now.

Our fourth and final week was about rockets and aerodynamics. For the science experiments, I did M&M Rockets (Alka-Seltzer tablets, water, and mini M&M tubes!) and Coke & Mentos, using other kinds of pop to turn it into an experiment to see what kinds of sodas will react to Mentos. The answer is: all of them! Dark pops seem to have a better reaction, though. Our final crafts were Balloon Cannons (had to make a balloon aerodynamic enough to fly straight) and Wind-Powered Cars. I read ‘Mousetronaut’ by Astronaut Mark Kelly, ‘Life on Mars’ by Jon Agee, and ‘Pete the Cat: Out of This World!’ by James Dean. We ended the program with fun and games and a promise to have the best end-of-program pizza party ever!

And by golly, we sure did! Rainbow Trout came and painted everyone’s faces, did a magic show, and gave every single kid a cool balloon shape (flowers, bows and arrows, swords, and poodles!). We had pizza from Pizza Ranch (they DELIVERED!) and desserts made by the library board, along with chips and drinks. The kids had a great time with Rainbow Trout and playing games with their new balloons! 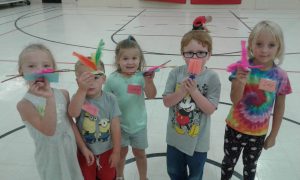 The award for Most Enthusiastic went to Jack Diekemper.
He was always so excited and happy at every single program, eager to please, learn, and to get his hands on whatever we were doing that day.

The award for Most Courteous went to Izzy Schnoor.
She was always so polite and wonderful at every program, and so patient and so sweet to us all, always willing to wait to be called on, and never pushy about it.

The award for Best Sharer went to Oliver Belina.
He was always willing to stop whatever he was doing to help the other kids, at one point taking apart his own craft to give the pieces to another one of the participants. He always shared, whether it was his materials, his time, or his smile. 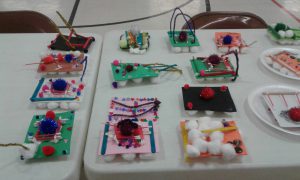 And the award for All Ears went to Cooper Kreikemeier.
At every single program, whether I was reading a book or talking about space, science, or whatever we were doing that day, I would look up to see Cooper’s eyes on me. He always paid complete attention and seemed to absorb everything we learned like a sponge, eager to respond quickly when I quizzed the kids on something.

These awards were chosen before all the reading logs were tallied up. Each award winner received a free full-day Carnival Ride pass to the Dodge County Fair from the Dodge County Agricultural Society!

The Kindergarten through 3rd Grade Runner-Up was Allyanna Besmer.
She read 42 books and came to three programs, which adds up to 45 books!

The Kindergarten through 3rd Grade Top Reader was Edyn Besmer.
She also read 42 books and came to three programs, which adds up to 45 books, but she read 11 more pages than her sister and came out on top this year!

The 4th Grade and Up Runner-Up was Oliver Belina.
He read 2,001 pages and came to three programs, for a grand total of 2,076 pages!

The 4th Grade and Up Top Reader was Cooper Kreikemeier.
He read 2,276 pages and came to three programs, for a grand total of 2,351 pages!

Each of the runner-up winners received tickets to the Omaha Storm Chasers (courtesy of the Three Rivers Library System) and a big prize, and the top readers won a coupon to Dairy Queen, a big prize, and a rocket ship playhouse!

We also had four wonderful volunteers at all of the programs: Desirae Svehla, Stephana Svehla, Felicia Harding, and Kelley Clark! Thank you so much for all of your help!

And a HUGE thank you to Rainbow Trout for coming and performing for us at our party!!!

This summer went amazingly and we already can’t wait for next year. I hope all of the kids come back and bring new kids to join them!! Please let me know if YOU would ever like to participate, volunteer at, or run a program here at YOUR little Snyder Public Library!!!

This is Liz the Librarian, signing off. <3 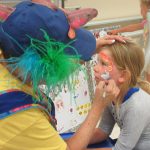 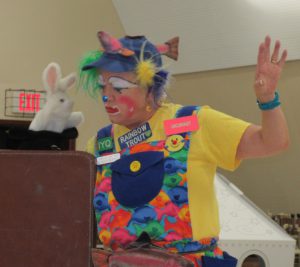 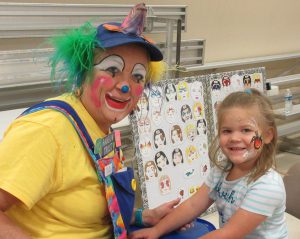 This entry was posted in News. Bookmark the permalink.

One Response to Our 2019 Summer Reading Program