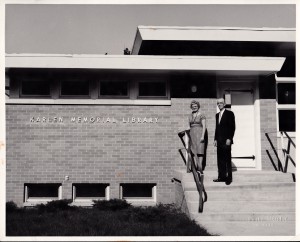 The first public library was established by the Beemer Federated Women’s Club in 1924 under the name Beemer Township Library and was located on North Main Street. It was later moved to a smaller building next to the township hall.

Club members and their daughters took turns caring for the library and checking out available books. Contributions of books from member’s private libraries and funds from the community helped start a permanent pool of library owned material.

In 1930, a committee of Mrs. J.A. Shors, then President of the Women’s Club, Mrs. Guy Nellor, and Mrs. S.G. Karlen, whose husband was on the township board, attended a meeting of that board for the purpose of asking for a mill levy of one-tenth of a mill, to help maintain the library. A motion by the board was carried. This permanent tax was set aside each year to help finance the library and pay Mrs. Ben Martin, who was at that time the librarian. She kept the library open on Wednesday and Saturday afternoons. Books on loan from the state library commission were still used, but many volumes were selected by the librarian and the library board for purchase.

In June of 1964, Lillian Karlen Holsten and Richard Harry Holsten of Dodge, Nebraska, donated funds for a new brick building to the people of Beemer in memory of Mrs. Holsten’s parents, Gottfried and Barbara Karlen. S.G. Karlen, son of the elder Karlens, donated a strip of his property for the site to the Library Board, in memory of his wife, Bertha, an enthusiastic member of the club and of its library activities.

On June 18, 1964, a groundbreaking ceremony was held, with Mrs. Holsten turning the first shovel of earth. The building was formally dedicated and presented to the Village of Beemer on November 6, 1965 and was accepted by Mayor, Bob Wordekemper. It has been open since July 17, 1965.