Free ebooks and audio books for all ages

Tumblebooks is offering free access for public libraries to several of its online book collections through Aug 31 due to the COVID-19 crisis. These collections include 1000s of popular books, and you don’t need a library card or authentication to access them. You can access all of the books immediately with no check outs or holds. Click a link below and start exploring.

A huge collection of steamy Romance novels for the older crowd!

In light of the COVD-19, to ensure the safety of our citizens, the Sargent Township Library will be closed until further notice. Patrons can still check out eBooks and audio books online through OverDrive
Our library does have Wi-Fi, so you may access the service 24/7 from the curb or outside bench using your laptop.
Everyone take care and stay healthy, We will get through this.

It has become necessary to remove the  Sargent Leader Newspaper Archive from online access.  It was being hosted by GoDaddy, and they claim the newspaper archive violates their terms and conditions. We disagree, but nevertheless, the newspaper archive has been taken offline for now. Hopefully it will be returned in the future.

You can still access and search past issues of the Sargent Leader on the library’s computers. 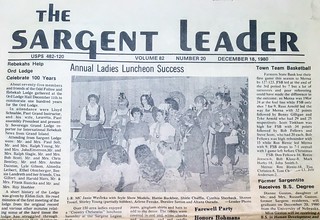 Come and Get Your Journals Stamped