Hey, everybody! I have a feeling that this is going to be a weird June. How about you?

Our Dr. Seuss party was swell! We had ten kids come to it, and each of them got a goodie bag with a bunch of neat stuff inside. 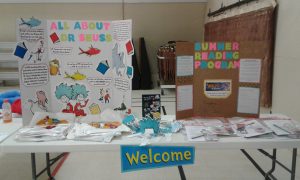 We started off with me reading ‘One Fish, Two Fish’, and we played The Cat Says (Simon Says). Then we moved on to Miss Beverly’s station, where she read ‘Green Eggs and Ham’ to the kids and did a coloring craft with them. 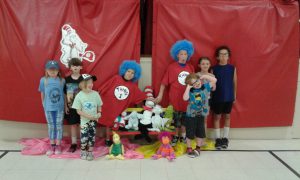 We then took pictures as a group, picked a stuffed animal to cuddle, and moved on to Miss Karen’s station, where she read ‘The Foot Book’ to the kids and then played Hokey Pokey with them. Then we ate! We had lots of good stuff, like Green (Deviled) Eggs and Ham, Lorax Snax, Truffula Treats, Pink Ink Drink, and more! We didn’t have much food left, which was great! I led the kids in a few games of Musical Chairs before letting them check out books, and then the party was over! 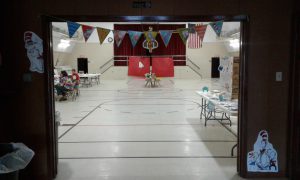 We ran out of time faster than I thought we would, and didn’t read all the books we planned on reading, but for my first Seuss party, I think it was a success!

We may keep the party a Spring thing from now on. What are your thoughts on that? We feel that since the kids do so much with Dr. Seuss week at school, we’d be piling too much onto them with our party at the end of such a full week, and that having it in May instead would work out better. We’ve got the rest of the year to figure that out!

Board Game Night is officially our most popular club at the moment, with seven kids showing up to it in May! Unfortunately, nobody came to the second Chess Club last month, and no one came for the Writing Club last week. But it’s summer and a lot of the local kids and patrons are out and about doing other things, so I’m not too worried. We’ve still got Gym Day this week, and a Board Game Night and Chess Club for this month. There will be no clubs in the month of July, due to the Summer Reading Program, and they will resume in August. 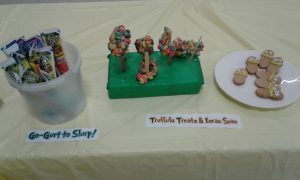 Speaking of the Summer Reading Program, that’s starting next month already! Registration is open to children ages 4 to 12, up until the first day of the program. We will be having the programs on Tuesdays instead of Thursdays (the 2nd, 9th, 16th, and the 23rd), from 1:00 pm – 3:30 pm. The end-of-program pizza party will also be on a Tuesday, the 30th of July, and we’ll be having a special guest there to entertain everyone! This year’s theme is ‘A Universe of Stories’, and will be all about space and S.T.E.A.M. We hope to see you there! 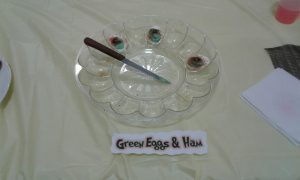 [Remember, if you have stuff around the house that you don’t use (such as toilet paper tubes, loose beads, little rocks and shells, little boxes, stickers, paperclips, clean pop bottles to cut in half, clean popsicle sticks, toothpicks, cotton balls, foil, craft corks, small washers, nuts, screws, springs, etc, discarded/broken jewelry, anything you can think of!) that could be used to make little robots, alien houses, spaceships, and other assorted crafts that we will be doing, please consider bringing it all 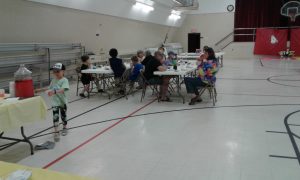 to the library instead of throwing it away! We will be using the materials for this summer and for future events! Or if you want to come volunteer your time and help us out during the programs, talk to the kids about space and STEAM, donate snacks and/or items; anything you can think of would be a huge help to us. Thank you again!]

This is Liz the Librarian, signing off!

This entry was posted in News. Bookmark the permalink.