Come To The Library’s Book Sale

The Sargent Library is cleaning out our storage of discarded books to have a fundraiser during Junk Jaunt. Bookworms, crafters, homeschoolers, and all ages will have a great time looking through 1000+ books. This will be held at the Sargent Community Center (314 W. Main St.) Sept. 27-29 from 8:00 a.m. to 6:00 p.m. daily. All proceeds will go to the Friends of the Sargent Township Library. 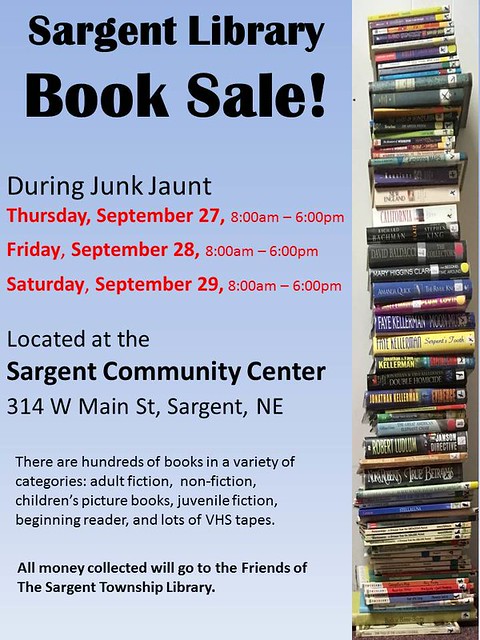 There is now an online bulletin board on the library’s web page. This is intended to be a place where people can post community announcements. If you want to know what is happening in Sargent, check the bulletin board.

This will only be successful if the community participates. If your organization has something happening, you can bring in a flyer for the library to post, or you can email a picture file to the library at sargentlibrary@gmail.com. Either way, your flyer will be posted online for everyone to read. Be sure to bookmark this page and visit often. Library Bulletin Board

A Rainy Day For Reading

Our afternoon of reading will be held at the Sargent Community Center today due to the rain. Be sure to join us for reading, fun, crafts, and activities. All ages younger than 6th grade are welcome to attend. The fun starts at 2:00 p.m. Make sure to bring your reading logs so that you can receive some Rocking Prizes!