Another weekend….another bout of nasty weather.  There is nothing special on tv but you can choose the world you wish to visit by selecting the book of your dreams!

Harry and Amanda haven’t been the same since the deaths of their spouses.  Now they are on a collision course with Amanda’s fairy-tale loving daughter, Oriana, in the driver’s seat.  The first part of the novel is quite a slow examination of grief and loss; however, the last half is worthy of a fairy-tale. “Harry’s Trees” by Jon Cohen.

Rose’s mother and stepfather went out for supper one night five years ago and never came home. The police think they were killed by a professional and the case has gone stagnant.  Joshua, Rose’s stepbrother, has devoted his time to publicizing the case on social media in the hopes of learning something new. Rose doesn’t have the time for that because kids in her school, kids around her, have started to be murdered. The story is action-packed and the murder of the kids is tied up in the end. “Dead Time” by Anne Cassidy.

Brock is Phillip’s best friend. Brock’s parents call Phillip imaginary, but they just don’t know any better. They have a grand time together until Brock gets left behind at the fair.  Now, they just need to find their way back to each other. An imaginative story of friendship.  “We Forgot Brock” by Carter Goodrich. 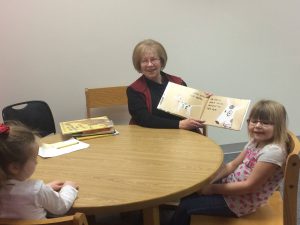 This lovely lady has consistently devoted large amounts of time to wrapping and labeling our books prior to their hitting the shelves for our readers. She also participated in the “Adopt a Reader” day at the library in February.  She is all things gracious and good and we are lucky to have her!