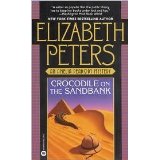 If you like historical mysteries, these two are a treat!

“Crocodile on a Sandbank” by Elizabeth Peters is the first in the Amelia Peabody series.  Amelia is a spinster in the late 1800’s/early 1900’s.  She inherited a large estate from her father and can now afford to travel the world.  Due to her interest in Egyptology, she plans a trip up the Nile.  Amelia has a tendency to take over and direct people as she sees fit, so when she runs into a well known archeologist (with a well deserved reputation for being rude) the sparks fly.  However, something is amiss in the Valley of the Kings.  Someone is stalking Amelia’s friend, Evelyn.  Is it someone from her past or someone looking to scare away the whole team?

Following the Napoleonic Wars, Sebastian St. Cyr, Viscount Devlin, returns to England.  Little does he know that he will soon be accused of a heinous crime against a young woman he knew only in passing.  Someone is trying to frame him for murder.  Will he be able to ascertain who the real murderer is or will he hang for a crime he didn’t commit?  Check out “What Angels Fear” by C. S. Harris.

These are indeed two Forgotten Gems worth checking out!